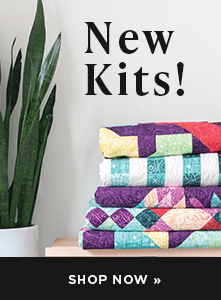 Connecting Threads received this delightful pattern, Metro Rings, and a clever ruler, Quick Curve Ruler from the company, Sew Kind of Wonderful. I was just dying to try it. Metro Rings is a modern take on the traditional Double Wedding Ring design which I also LOVE. I decided to make a block and this is how the construction went…

I first sewed five 2-1/2″ x WOF strips together. Then after pressing seams this unit was sub-cut into 2-1/2″ x 10-1/2″ strips. From this I cut the arcs using this Quick Curve Ruler as shown below with other sections of the block. It is an interesting way to construct the block. Lots of cutting, but it was fun! 9″ squares are cut diagonally once making  triangles. Each triangle is reshaped using the Quick Curve Ruler. First the corners are cut off. Then a lovely curve is cut into the bottom of the triangle. Next, rectangles are cut and reshaped as well giving them this wonderfully soft curve.

Now it’s time to piece half the block together. The reshaped rectangle is laid on the pieced curve leaving a 1/4″ seam allowance at the end. Notice that the middle point of both units is marked with a pin for matching later? The pieced arc needs to fall past the curved rectangle 1/4″ on each end. Matching the center pins first helps with the rest of the pinning. The sides will ease in beautifully.

Stitching the two pieces together… To add the third piece, begin by pinning the center of the unit just finished, and a triangle inner curve. Be sure to leave a 1/4″ of the triangle piece at each end here as well. Sew the reshaped triangle and pieced unit together. Now it’s trimming time for squaring up the piece! This is where I made a mistake and misunderstood the pattern. I trimmed the bottom of the unit even with the bottom of the pieced curve and this is wrong. It is supposed to be trimmed leaving 1/8″ seam allowance! Yikes! The next step is to sew two of these trimmed units together. Find the center of two setting triangles, and place in the center (seam) of the unit just made. Pin and sew. Press the triangle back. Note the result of my mistake here. Ugh! When I cut too much off the bottom of the unit and then sewed the two units together, it took space from the pieced rings. Now the setting triangles don’t meet at the ring joint. Square up the finished block to 10″. Sew four of these beauties together and this is what you get! My version of Metro Rings! I’m not sure if I like the seam through the middle of the rings but it is a fun way of making a Double Wedding Ring quilt!